AUSTRALIAN coach Mal Meninga has confirmed his squad for the Rugby League World Cup - after the 24-man Kangaroos outfit was leaked on Monday night.

Uncapped trio Dane Gagai, Wade Graham and Tom Trbojevic are in the squad as well.

The Kaufusi selection is the biggest surprise, however Meninga insists the Storm second-rower deserved recognition for an outstanding season with the NRL premiers. Meninga has opted for Slater, Darius Boyd and Manly's Tom Trbojevic as fullback options ahead of Tedesco.

"We've got a great array of fullbacks playing our competition at the moment and we've got the Clive Churchill fullback in Billy Slater".

The only omitted player Meninga called was Ferguson.

"There was just such a hard decision but I think it come down to the versatility and around the ability to play a number of positions".

Kaufusi made his NRL debut only two years ago but has enjoyed a steady rise in the game after being named as the Maroons' 18th man in the 2017 State of Origin series.

LaVar Ball Pulls LaMelo Ball Out Of High School To Train Him
Just when you think you have LaVar Ball down to a science, he goes and does something completely unexpected. The loss of LaMelo from the high school ranks will have a major impact on Southern California basketball.

"We've got the incumbent in Darius Boyd; never lost a Test match in the green and gold jersey".

Storm teammate Will Chambers has also been selected. "He's a big body, can play in the middle, he helps balance the footy team out".

"Obviously he was clearly upset". He's been a great player for the green and gold but I had to be honest with him around his form and he accepted that. "We move on", he said.

The full Kangaroos World Cup squad will travel to Fiji for an exhibition match against both Fiji and PNG on October 14.

Australia is the defending World Cup champion and has won the tournament 10 times since its first edition in 1954. 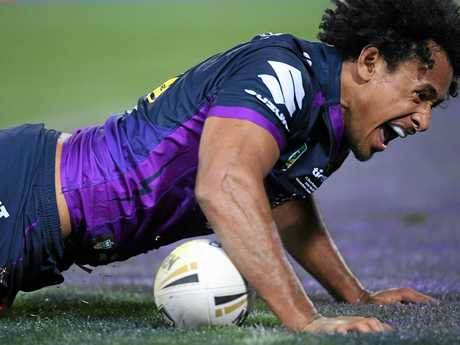 Redskins' Josh Norman (ribs) out of Monday's game against Chiefs