More than 100 people have been arrested in Spain after police busted a criminal network responsible for smuggling Iranian nationals into the United Kingdom on commercial flights, Europol said in a statement on Thursday.

Spanish police arrested 14 members of the gang in Malaga, while the leader of the crime syndicate was detained at Heathrow Airport by the Metropolitan Police as he tried to catch a flight to Brazil to evade capture.

Fourteen members of the group were arrested in Malaga in southern Spain, which the network used as a base and main transit country.

The suspected ringleader of the gang was held at London's Heathrow Airport after a European Arrest Warrant (EAW) was issued by the Spanish authorities for his detention.

Searches of safe houses in Spain found seven Iranians, including a five-year-old child, as well as computers printers, more than 400 blank ID cards, firearms and 40 authentic Iranian and Spanish passports.

A total of 101 people were arrested in the operation, Europol announced in a Thursday statement.

Spanish police arrested 14 members of the group in Malaga, while another 42 people, who were accused of selling documents, were also arrested.

The investigation into the network began a year ago after seven Iranians were intercepted while carrying forged and authentic passports attempting to fly from the German city of Hamburg to the United Kingdom, according to the statement.

The network, which operated out of Malaga, charged Iranian migrants around €25,000 ($30,000), in exchange for fake Spanish passports, travel documents, transfers and accommodation, according Europol.

A spokesman for Spain's National Police, which released footage today showing them seizing passports and other material including computers, two starting pistols and an imitation rifle, said: 'National Police officers have smashed one of the main worldwide criminal networks, due to the number of people trafficked, which operated in Europe and specialised in trafficking people from Iran to the UK.

The European law enforcement agency assisted in the operation by providing analytical support and organizing operational meetings at its headquarters in The Hague. 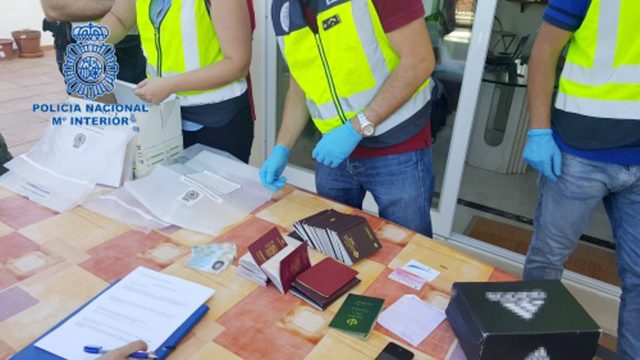 Partager !
Précédent: Netflix making a series on Aravind Adiga's 'White Tiger'
Prochain: Power in Outer Banks should come back on in 2-3 days

Neymar on a World Record transfer to PSG