It's an action movie with ho-hum set pieces (a firefight, a plane crash, a van rollover down a hill, a mummy zombie attack - you know, the usual.) It's a Tom Cruise vehicle that ultimately calls on him to be a full-blown romantic, which is as laughable as it sounds. The mummy, she transitions from a creepy, violent monster to a seductive goddess easily, but her impact is reduced by the screen time devoted to convincing us of Cruise and Wallis' love angle, even though that's devoid of any chemistry.

The Mummy offers several such treats including a visual nod to Fraser's 1999 version and its then-state-of-art sand storm demon.

But the Dark Universe is off to a rocky start and the critics have been ruthless. Some people wanted him to return for the Mummy reboot, but Uniersal had different plans when they cast Tom Cruise as the lead.

The soft and squishy ending serves to undercut any edge or originality the movie might have had and we wind up getting precisely what was advertised - some cool effects, a couple of thrills and not much more. It's the final portion, especially, where the movie falls apart and makes little sense, even allowing that this isn't one of those projects meant to be overthought.

The Mummy is far more an adventure movie than a horror film. "It's not that it's bad, it's that it never could have been good".

Hanging around after a movie is finished to check out a potential post-credits scene has become pretty normal - but you don't need to worry about that for The Mummy.

Helping Morton out with his girl trouble is archaeologist Jenny Halsey (Annabelle Wallis), whose main job in the movie is to explain what the hell is going on, as well as introduce Morton to a certain Dr Henry Jekyll (Crowe), who has a bad secret to Hyde, er, I mean hide. His unwilling accomplice Chris Vale (Jake Johnson) bears the brunt of his notoriety by being the first one to be possessed when an ancient, cursed Egyptian Princess Ahmanet (Sofia Boutella) gets resurrected and restarts her search for the Chosen one - a vessel to be inhabited by Set, the Egyptian god of war and chaos.

Cruise, as Nick Morton, is Cruise - all superficial charm and charisma. He's a trigger in and of himself - as soon as he states his name, you're supposed to light up with anticipation of his turn into Mr. Hyde - but it all feels perfunctory, a rerun we've already seen that already feels stale. Will it be among the film's weakest, saddest, most pathetic scenes? The most outright comes toward the end of the movie, where he suggests that the only way to combat evil is to pit monster against monster. Alex Kurtzman'sfirst entry in the shared universe is a strangely subdued movie: the scares aren't scary enough, the humor is often forced and out of place, and the adventure never feels adventurous enough. The Mummy happens to be the beginning of this one. The story is just OK. The characters suffer a bit and the story sometimes gets lost. 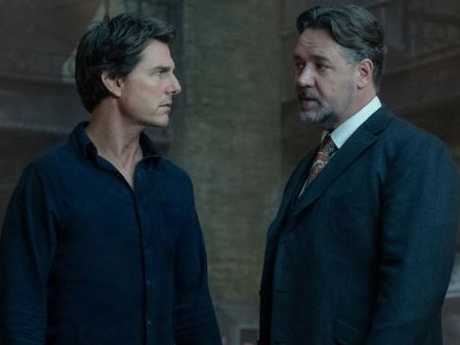 Partager !
Précédent: Stock is down at $3.17 (VSLR) Vivint Solar to Relaunch Residential…
Prochain: Apple reinvents home audio with the HomePod

How Apple may kill the smartphone in 10 years: Gene Munster

LeBron is not envious of Golden State